Fear and the Alligator Mouth

Fear and the Alligator Mouth

Fear, we all have it within. Fear, the fight or flight mechanism. Fear is good. Fear can keep you safe.

Making someone afraid is bad. Conducting yourself without fear, also bad.

Fear, the healthy respect, it’s eroding and there is good and bad in the erosion.

Unfortunately, one of the fears that is eroding is the fear of getting slapped or punched in the mouth.

Read a few stories about cursing in the work place a few weeks back. The information didn’t surprise me in the least with the conduct I’ve seen over the last decade or so in less formal places. This would include the driver of the vehicle in the cursing incident I’m gonna tell you about.

A few links that’ll give you a jumping off point. All open in a new tab or window.

Who swears more at work, men or women?

Watch Your Mouth! More Women Swear at Work Than Men

I witnessed a cursing incident. Wasn’t pleasant and I felt for the person who was in the passenger seat and had to listen to the broadcast. A captive audience to the diatribe of the driver.

I looked at the guy in the passenger seat, give him the palms up with shoulder shrug and look to the heavens with head shaking.

This is a Friday afternoon on hot sunny day in the core of Toronto during rush hour. It’s always tourist season in this city so factor that in too.

Me and the guy, we’re still looking at each other while the driver carries on with the F Bomb Blues. I give him the “can you believe this, what’cha gonna do gesture” again and he gives it back to me.

Meanwhile people are stopping on the street, looking for where this Blue Bird of Unhappiness is chirping from.

Third time is the charm right? Well me and that guy, we go through the, “I don’t know, can you believe this shit” shrugging ritual again and, and, and the driver sees him do it.

Then I felt even worse, that poor, poor, bastard. The guy was gonna have to explain to the woman the “what the hell was that?” that she’d just seen. Right then a gap opens and she’s in to it and moving off, slowly.

As they move off to the east I’m left standing there watching them go and thinking, “Fare thee well you poor, poor, bastard”.

Girls have their RITES and so do guys. Only a guy can understand what is going to happen next. While men and women are the same species, maybe, we are vastly different creatures.

I could tell he didn’t condone the action and I’m hoping that little tidbit of information gets passed along to little Ms ME. No not “Medical Examiner and yes “Millennium Entitled”. Hey maybe it was a different inflated entitlement. Or just maybe, and as much as women like to protest they can’t be such a thing, (yeah they can) she was just an asshole.

I’m betting she’ll tell him, “I don’t fucking care”. Any takers? Just to be safe, that bet, it’s rhetorical.

It’s a whole lot different when a guy does it and it’s a woman in the passenger seat.

Now when a woman tells a man about his behaviour, he’s expected to be contrite and appreciative of the efforts that fine woman has made to show him the error of his ways. But if a man does the same, he’s insensitive for not being on her side. Doesn’t matter she was carrying on like a braying jackass. The guy is wrong and the woman is right.

Brings to mind using sex as a weapon and why guys will just shut the hell up or stick up. Sex as a weapon, that’s a sordid tale for another time.

Her outburst had to do with being late and not being able to move faster in rush hour traffic. She was held up. Her getting to where she had to go, her only consideration. She was about that close to a self-induced persecution complex.

Male or female, the ones running their alligator mouths are going to be the ones expecting their friends and family to auto back them.

The infamous “Hummingbird Ass”, there are more and more of them vocalizing every day because they do not fear. This is bad.

Backing them, you’ll probably have to do so one way or another because that “Alligator Mouth” overloaded what is most probably a “Hummingbird Ass”. Not going to take the chance on them getting reamed or hurt. Especially if you’re a guy, you got no choice but to stand up. Even if you’d like to take a strip off the asshole her yourself on this one, (with the accompanying head shake and eye roll) you gotta stand up.

Women are real good for calling guys on what they do. How about paying attention to and emulating what men don’t do instead of emulating what you think they do?

As always, I’ve talked to those of both sexes about what I see and what I think. The good people in my community are good enough to tell me what they see and think. A diverse bunch and I appreciate them all!

We talked about the lack of fear in personal deportment. Conduct if you prefer. Lessons imparted that help bad things not happen, too you.

Apparently, in this century, cursing is the new civility. Well maybe for women in the office, walking down the street and potty mouth groups heading for a potty break.

Angry is the new happy. Just like fear, anger can and does elicit the fight/flight response. Pretty much the same effect as an alligator mouth overloading a hummingbird ass. That response would be walk away or slap you fucking silly.

Not all slaps are physical. The verbal ones can hurt more than a physical slap and take much longer to heal, if at all. The verbal slap is quite likely to be more inviting to make response. And then it’s on and it’s ugly and no one needs it.

Within the confined quarters on an automobile, that cursing the world behaviour gets real old real fast.

I trust you’ve had a look at the links I’ve included.

Women have got to start being accountable for what they do. Especially so when in an environment where they invented the current fucking language, the office. Women can’t be playing the, “Well men do it” card when they are the biggest offenders.

If you’ve read me some, you know as a certainty that I talk with the people in my community. Some of what we talk about is what we’ve seen, encountered, bypassed on the street.

Again, if you’ve read me you know I’m a smoker. I pop out for one and take in what’s going on around me. Sometimes I just pop out because moving around helps the thought process.

When the cursing is cascading down the street in 4 or 5 part disharmony, more often than not it is women.

I’m not going to pull a holier-than-thou televangelist routine and pretend I don’t curse because I do. I’m not going to lie to you and say when I curse it’s all for effect cuz it isn’t.

Thing is, and I get it, cursing derives from the word curse. Not many people seem to understand that and it is a shame, all they’re really accomplishing with the behaviour is putting a curse on themselves.

I’m a proponent of being able to use all the words. Simply, male or female, cursing as a regular part of your vocabulary, it isn’t attractive. I haven’t been real comfortable dropping the expletives in to this piece. There has been muttering under my breath which has included epithets.

Of course you are free to carry on as you like. While you’re carrying on, consider this. 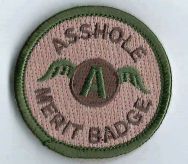 With angry as the new happy, and people putting up with much less, one way or another, your alligator mouth could be on the receiving end of a well deserved slap and merit badge.

2 responses to “Fear and the Alligator Mouth”