We’ve a new friend in the writers Menagerie. Our new pal has made him self quite at home with me and the others. He has BartholoMEW to fly with. Horace, Harvey and Jerome appreciate having a 4th for Euchre and Bridge.

When he and Bernie sing at the same time it can drive you right bonkers! You can listen for yourself. Bernie is all about the tunes but this guys likes the videos. Hard to believe our new friend is as old as he is.

He’s complex and really a sweet guy when you get to know him who does have his moments. But don’t we all have our moments; some of them Majik.

All the links open to new tabs. 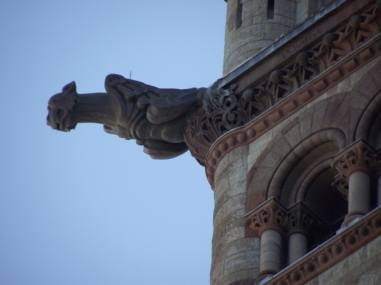 Morning’s breaks early for the two above
Notice made to the two under sacred grove
Readied, willing and oh so capable to kill

Evils shaking off the debauchery of the night
Unaware, heaven and hell added to their plight
Heaven’s thunder beats, hell begins to quake

One from the depths attacks where the evils creep
Horn of the magical beast impales, blood seeps
Blue fire from the one named Demon erupts

Lightning chains turning the living to charred
Pain and suffering ordered carried to the beyond
Horns of both beasts stained, dripping the evil’s flesh

Some standing stunned among smoldering remains
Others swarm to the call of false prophet claims
Many more to feel the strikes and stings, an absolute

Angels together, razing these evil’s doing
Angels apart, bleeding out those beyond hell

Massing together, evils three in shared horror
Who’s will dare intrude on the destined honour
Cries lifted to the one, deliver them the way rite

Wings from above settle below beside the horned
Back to back and quarter to quarter we’re formed
They come, they fall, the evils and their books no more

Angels scarred, side by side, majikal steeds torn
Retreating through the mutilated evils with scorn
Tears fall gently from the tortured soul of The One

I’m told there has been a WordPress glitch and the posting of Part 1 may not have shown up in your reader. WordPress is my hub to other locations so I cannot delete and repost. The link to “Act I” will open in a new tab or window.

All they’ve done, all that’s been taken
One way or other, they’ll know forsaken
Sickness ends with certain death of life

Crossing bloody rivers where bodies flow
Earth so scorched nothing shall ever grow
Signs clearly showing today, angels must shine

Humanity at violent odds defiling its ugly self
Three books, contrived by false prophets for wealth
Acting out vile passages in the name of The One

Doings despicable with disregard to the old rule
Bloody axes fall, arrows fly, pain to them from you
You’ll soon see what’s coming from the one’s will

Feeling the point of frightened flight
Closer still to making the stand to fight
Must be true to what makes you, You

Burning to get out, the evils beyond hell
Cries to heaven and the unholy swell
The wings unfold the sword slides free

Won’t you join this too big quest for one
A wayward angel’s angel spies fun
Them or we, death by high decree

Horses saddled and fully adorned
Winged one to me, to you goes the horned
I’ll fly on high while you ride below

Journey’s onset leading two to onslaught
One prays, one brays “not for naught”
Two weapons with wisdom from the one

Winged ones looking off horizon bound
Horned ones plodding the underground
Each to the other unseen, wills to minds

Another of those that haunt the writers garret. This companion not as sinister as many believe. A Damn fine player this one and open to a challenge almost any time.

One chosen for one, going tooth and nail, one on one,
Naming you, I have plots you could never conceive
Lord of the below as the minion of a not so mere mortal
Useless to carry on with boorish vitriolic contempt
Caught you were; In this service you shall remain
In time, you may come to appreciate my game

Hello old friend, it is so very good to not see you again
And thank you, and yes O’ furry one I did miss you too
Really and truly I did, doesn’t flow the same without you
Varied places you say, some enjoyable provocative sorts I trust
Each had a charm did they, not quite enough to keep up eh
Yes my friend the same for me, no, none of them enough of you

Climbs herself up on that chair, gives up a little high thigh
Overtly lets them legs cross, grey skirt makes a swift shift
Uncrossing them, a small curvy push, tilting back the cool stool
No girl no, don’t be tugging that bunched up gown down

Tawny angel so desired, yeah she knows in how her glow shows
Every guy watching only you, all gone redheaded stepchild wild
Running fingers through that mane, nails a French tip trip
Captivating eyes blazing up, she’s caught someone’s crooked look

Under table knees just a knockin, girl’s got the rockin’ walkin’
Takin’ a glance this way, eyes meet eyes, smile beguiles
In a stride she’s by my side, totally insane, all gone a hazy crazy
Exchanging whispers, hair flip giggle, number goes in to a glad hand

In response to The Daily Post’s writing prompt: “Wicked Witch.”

The Assignment:
Write about evil: how you understand it (or don’t), what you think it means, or a way it’s manifested, either in the world at large or in your life.

I believe I answered quite well on the topic in my piece, “In Perpetuity“.

The poetry is in Acrostic format. Should this be a place where you would like to spend eternity and need help getting there, keep it up!

So y’all know, I also have a witch and a very good friend with magic crystals. While the things they can do are extreme, it aint even close to the level of living undead hell I can put you through. I seem to recall mentioning, “veracity“? 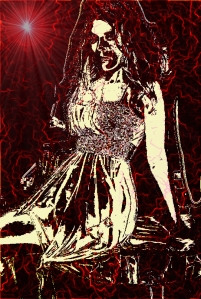 An Angel’s rendering of what the eventual home will look like for those that, shall we say, deviate to the deviant.

If you’d care to read more of what I have to say, and for your own salvation I strongly suggest you do, visit here, “Random Angel Musings“.

PS … I don’t do Halloween

All imagery and writings, mine.

We were just walkin’ along that beach
Seeing the ripples, rise higher and higher
Stopping to stare into that setting sun
Holding each other in the twilight
Watching the waves on fire dance

Moving on down the darkening shoreline
Our footsteps left behind on the water’s edge
Stopping again to watch the fire waves go dark
Listening to the surf gently kiss the sand
Tide getting higher, footsteps fading, our fires rising

We Have One Now – Lyric

We Have One Now

Happens once and a while, only for one man smile
An angel face, melting eyes, her sweet breathy sighs
Dropping in to talk, lingering on a walk
Yet another slow wink, it makes a man think

Open and inviting, lips so wildly enticing
Under the silky tresses a body that impresses
Every move she makes gives a man the shakes
Voice dripping honey, knees going all funny

Slow, gotta go slow, so I know
Slow, this aint no show, so you know
Slow, not some mindless go, so we know

Everything old comes back new, feelings where there’d been so few
Really not recalling before, just ready for love once more
Head getting in the way, wondering because she’s May
And knowing all too well, I’m December with little left to tell

Does for me what Adam must have felt for Eve
Only us in this minute, first kiss won’t ever forget it
No more will hearts fall, for us the angels did call
Evening with our sunset sin, morning breaks and we begin

So glad it went slow, yes I know
So now a forever show, yes you know
So in love our soul grows, yes we know