I was visiting my Obelisk this week and got a little retrospective.  I enjoy flipping through time and screwing with the “Temporal Prime Directive”, among other things.

I reiterate, “My Obelisk” so get your own. No, no I don’t share!

A pothole appears where there never was one and you lose your oil pan. A tear suddenly happens in the grocery bag you’re totting and your goods are falling out. You find yourself going the wrong way on a one way street and you tell the cop writing you up that you’d swear on the stack of burgers you got on the seat beside you that the arrow point the way you’re going.

These are all impositions brought upon you by time travellers. It’s a very good idea to watch whom you piss off cuz…. They could be a time traveller. They could have angelic friends who don’t mind handing out some comeuppance so to speak.

I was winging my way around and stopped in front of the Hockey Hall of Fame to admire, “The Players Bench”. While I was gazing on said sculpture my critical thinking decided the piece should be seen throughout history.

I like this “Players Bench” piece enough that I think those in the past and those in the future should be able to appreciate Canadian Culture at my desire.

A couple days back I went forward to next Thursday (check the posting date) and brought the sculpture with me inside my Obelisk where it shall remain forever, maybe.

If you’re located right beside the sculpture at oh, 3ish in the afternoon, don’t be  leaning on the thing getting your picture taken. If you’re attached to the piece when it moves, you’re going in to my Obelisk and I aint letting you out! 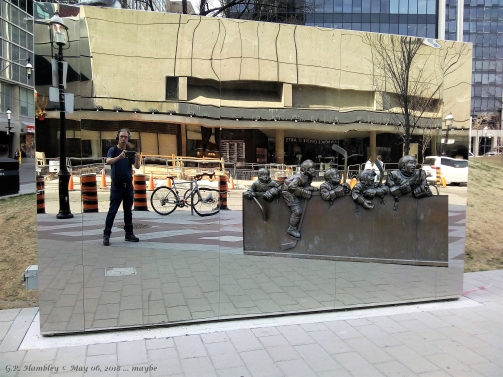 In the future and past, I will be moving things around and when I do, it makes holes and tears in the fabric of time. If you should lose something or bottomed out, among other evil nasty things that you can’t disprove in court … I did warn you!

I haven’t done the observational thing for a while. Feels like it is about time I did so again. Strange doing it on a Monday as I usually reserve my random rambling and musing for weekends.

The Games finished up their two week run here yesterday. From where I sit and live there was much ado about nothing as far as the logistics were concerned. Mind you the extent of my activity as far as the games were concerned was girl noticing. Firstly, someone has to do it and I’m good at it. I said noticing not ogling. Kindly remove your minds from the gutter among other places. Secondly I didn’t see more than a couple male athletes in total.

Let’s get something really creepy and flat out disgusting out of the way first. This is for you the keepers of Toronto The Good. One of my coffee spots is on Front St near St. Lawrence Market. On the day of both the opening and closing ceremonies that part of Front St. was a travel path for busses carrying games participants. On both days the parking cops went along the street mid afternoon posting signs for no parking. At the time of day the no parking was posted there were already vehicles parked. On both days I saw vehicles towed away.

This is the creepy and flat out disgusting part. Neither the day of or the day prior to the parking being taken away did I see postings notifying the public that the parking space would be unavailable. I did see a couple vehicles towed each day and wonder how justifiably irate the owners of those vehicles were. Oh yeah, there were parking cops on the route after the no parking signs and the meters were bagged to stop people from parking. This is just the stuff I saw so maybe there was a memo sent out to the world by osmosis. I didn’t get the memo either.

Our Canuck Girls Softball team. Yes our girls as I said to an artist buddy of mine. Not in the first person personal as I had to explain to him but hey lonely artists think differently. Those of you that are not creatives may freely substitute, “weirdly” for “differently”. In fact we’d appreciate it if you do substitute. Weird gets you left the hell alone, different not so much! We’d also appreciate it if the non-creatives sense of humour was somewhat expanded. Work on it.

I was running errands one afternoon and saw a couple of our girls in the same store I was. One of them had a bruise the size of a grapefruit on her leg closer to the hamstring than the calf. We hit the cash at the same time. I turned to out bruised warrior with a smile and said, “I just have to ask, Softball?”. The young lady said such was true. I told her enthusiastically, “how to take one for the team!”. She smiled and told me, “THANKS!”. Hockey, Lacrosse, Softball, Male, Female, we Canucks are all the same, we can take it and laugh it off.

Canada’s entire Team was in coffee spot a couple of times. It was girls being girls as well as exemplary ambassadors and young ladies.

The Softball Girls from the U.S. of A. Were also in the vicinity. A couple would visit alternative coffee spot in the mornings. Friendly and outgoing with the staff. Not quite so gregarious around the other people enjoying the coffee spot. The American girls would light up charmingly if you smiled first.

I did see a young woman sporting a USA Field hockey t-shirt this morning. She had a bit of a hitch in her giddy up. Here is hoping it isn’t too serious and that hitched giddy up came against our Canadian Girls in the Semi Final which America won. Field, ice, pavement, if it has hockey in the name of the game, y’all have been warned, repeatedly!

I did see a group of four from Mexico come in to the Front St. Coffee Spot the evening before the games officially began. Before I could tell them where to go, they were gone. They appeared to be looking for something to eat for dinner and I know a couple great spots in Kensington Market to get great Mexican. One where the Green Sauce is reported as better than SOCAL! In fact I was told of that establishment, the taco chips are simply a delivery mechanism for the Green Sauce!

All said and done, for those of us that live in the core of this great city, except for those two parking incidents I noted, getting around wasn’t bad at all!

Almost forgot, Women’s Softball Final, it was Canada 4 and the U.S.A. 2. That’ll teach you to mess with Canada in anything hockey related!

This is also a life lesson from a Life Coach

You are looking at a 1 off commissioned piece.1 print of this exists in the world and the ability to produce more does not exist because after the individual approved their print, the master file was destroyed. A small file that is not capable of production was taken by me with the clients consent so I could display this piece with my other works. Not even going to give tech specs on this one. Just know the print was large but not overly large and the working file size was huge. The goal keeper is from one of my own photographs.