Here in the age of “Instant Gratification”, my hair is the example.

Back in April I was asked by a man of about my age as I was in line to get in to a Blue Jays game, “How do you get hair like that?”.

My hair is always clean and so is the rest of me. I’ll grant you that it wasn’t the best looking when the hair wasn’t in a pony tail.

The hair got left alone to grow. No micro cuts along the way. My hair reached a length where it was getting difficult to brush because my arms weren’t long enough. Past time to get the cut.

Some of my community friendlies have noticed the cut and commented. Said the same to those people, I had to leave it alone until it reached the point I could do with it what I wanted with it. 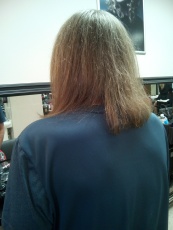 This is about change and adapting. Most changes do not take place over night and we all know this.

Change is also about patience. Being patient enough to let the evolution take place.

Start it up, pay attention and leave it alone. What ever “IT” is It’ll grow and it’ll work out according to plan, maybe. 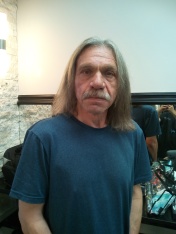 I was visiting my Obelisk this week and got a little retrospective.  I enjoy flipping through time and screwing with the “Temporal Prime Directive”, among other things.

I reiterate, “My Obelisk” so get your own. No, no I don’t share!

A pothole appears where there never was one and you lose your oil pan. A tear suddenly happens in the grocery bag you’re totting and your goods are falling out. You find yourself going the wrong way on a one way street and you tell the cop writing you up that you’d swear on the stack of burgers you got on the seat beside you that the arrow point the way you’re going.

These are all impositions brought upon you by time travellers. It’s a very good idea to watch whom you piss off cuz…. They could be a time traveller. They could have angelic friends who don’t mind handing out some comeuppance so to speak.

I was winging my way around and stopped in front of the Hockey Hall of Fame to admire, “The Players Bench”. While I was gazing on said sculpture my critical thinking decided the piece should be seen throughout history. 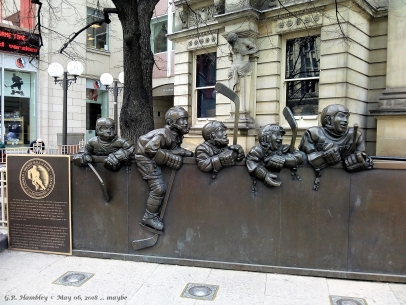 I like this “Players Bench” piece enough that I think those in the past and those in the future should be able to appreciate Canadian Culture at my desire.

A couple days back I went forward to next Thursday (check the posting date) and brought the sculpture with me inside my Obelisk where it shall remain forever, maybe.

If you’re located right beside the sculpture at oh, 3ish in the afternoon, don’t be  leaning on the thing getting your picture taken. If you’re attached to the piece when it moves, you’re going in to my Obelisk and I aint letting you out!

In the future and past, I will be moving things around and when I do, it makes holes and tears in the fabric of time. If you should lose something or bottomed out, among other evil nasty things that you can’t disprove in court … I did warn you! 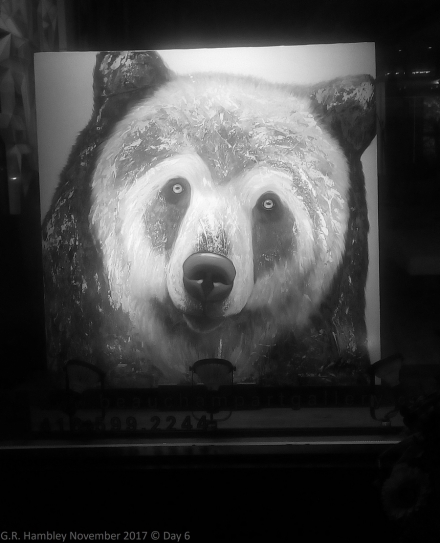 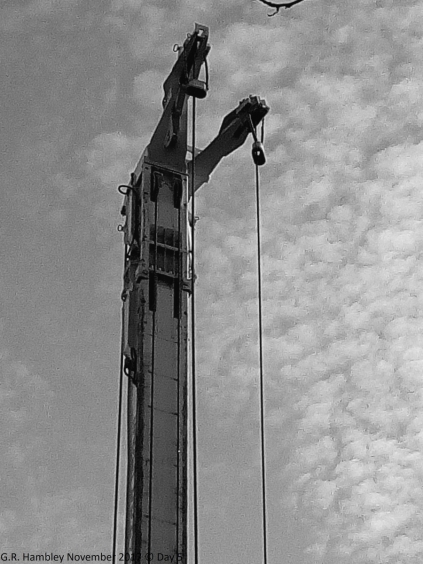 7 days, seven black and white photos of your life. No people, no explanation. Challenge someone new each day and tag the person who nominated you.

7 days, seven black and white photos of your life. No people, no explanation. Challenge someone new each day and tag the person who nominated you. 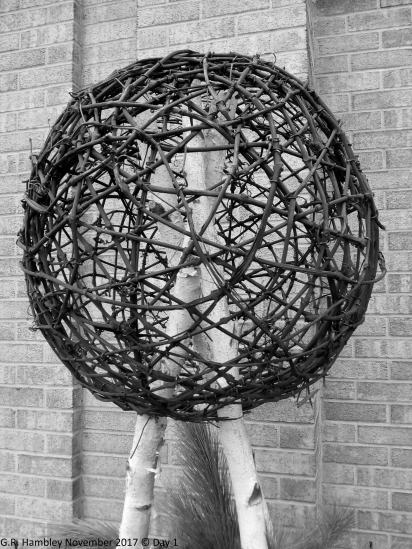 If you take the challenge, leave me a comment.

Aye, the style doth differently challenge me
Perhaps tis worthy to read of others pursuit
Much to learn before bidding adieu the plebe

During writing there was A moment profound
Me thinks the engineers should hear this tragedy
Never, ever, let MS Word read poetry aloud!

There you have it, a first “Terza Rima”. Still not sure where the stop in the scheme should be. When I got in to the flow and the scheme, it is fun and it is a beaut!

I couldn’t believe it when the censoring happened. In one of the last places you’d expect to find censorship taking place. It took place in a Scrabble game on POGO.com. For those that don’t know, POGO is a terrific games site run by EA, Electronic Arts.

While I was compiling this piece I had an encounter with Spotify a couple days ago that wasn’t censored.

The specific word is the “N” word. I’m not even real comfortable using that word here within the context I’m talking about. I was completely fine with trying to score points using that “N” word in a word game.

Scrabble; no proper names, no places, no swearing. I had a look at the “Hasbro” site as it’s their game. After a quick read I decided this serves as a better source for reading the “Scrabble Official Rules” than what Hasbro is showing.

I detest both censorship and revisionist history! We’ve all been taught that running in to a crowded theatre and screaming “FIRE” when there is no fire is not free speech and is dangerous and criminal. Nailing your ass to the wall should you wilfully endanger others, I’m good with that.

I wrote a Quoth me piece some time back entitled, “T + W + T = TNT”. It’s about writers and words and yes I qualify.

I spoke with some people about my encounter of censorship in a game. More about those conversations further along.

There will be visual aids and lets please remember we’re talking about words and censorship. After the fact, I tried and there were a couple other words I found I wasn’t able to play, “Rape” and “Slut”.

You can see the tiles in my rack and where I was going to make the word, “Nigger”. Now that I have that out of the way, I’ll go back to using the expression, “N word” because I’m more comfortable expressing with that term and because this isn’t about gratuitous use of a word.

I made the word, “ENGINE” below where I wanted to go.

I am competitive. Any game I play, I play to win. I don’t care Thing 1 or Thing 2 about a participation ribbon! It’s about winning the game. Yes I play by the rules.

One of the people I spoke with about the word and censorship, a black woman. This is the same person I called a conservative during one of our conversations. She’ll even play Scrabble with me as long as there is no money on the line. That friend of mine contributed her thoughts to this piece when I asked and I thank her for it. I’ll get to it, further along.

There aren’t many people I know who’ll play that game or any word game with me. How many of y’all would take on someone from the PGA or LPGA straight up? That is Golf for those unaware. Guess again. Those players will beat you handily just using a 3 wood, a 7 iron, a wedge and a putter off any tees you like.

Any game, you want to get off to a good start. I showed my friend another screen capture. Told her this is what it’s about and with hardly any bother, 110 points. Yeah I kick the bots around too.

I made, “Vault”. The Bot makes, “URGE” and oh it was all over but the crying of the Bot’s oily tears right there!

This is where it starts getting real ugly. We are talking censorship. The decision to ban the “N word” ultimately comes down to one individual who signed off on the acceptable word list for Scrabble at Electronic Arts. Those two other words I noted, “Rape” and “Slut”, someone made those unacceptable for game play as well.

I’d of loved to have been in on that meeting. My commentary wouldn’t have been for the genteel or the Politically Correct Set when that decision got made.

Then along comes the gold nugget courtesy of Spotify who let that word go right on through and in fact provided it for me to look at.

I’ve accumulated a lengthy song list on Spotify. You can go see and use what I’ve put together just by looking me up at Spotify. There are no black outs in effect and there never will be.

Spotify creates, “Your Daily Mix”. These mixes are created from songs that are in your library and interspersed with songs the Spotify Bot sees as something you might like. At Spotify just like at POGO, someone had to program those Bots.

It certainly appears the good people at Spotify are just leaving the art alone and this is so good!

I talked to half a dozen people about the encounter I had with that “N” word to get their thoughts and feelings.

A Black Woman, a Caucasian Jew, a 1st Gen Canadian Film Maker, an Actor, a White Woman and of course, Good Friend.

Each and every one of us involved in this little adventure displayed some raw emotion. The question was asked on banning the word. Making the word “nigger” just disappear so no one can use it in any way, shape or form.

The Black Woman, she wondered about a couple other words that could be attached to a ban list and those two words are “Honky” and “Spic”. This same individual did a Google search and returned to me that the “N” word is listed as, “THE most offensive word in the English language”.

One of those people on initial response said the word should be banned. After discussion that position changed.

If you’d like a someone else’s perspective on words and language and how it isn’t the words that are evil, have a look at “George Carlin on Language”. If you haven’t heard George on language and words, you’re in for a treat or apoplexy.

The “N” word along with the battle flag of the Confederacy and the Nazi Swastika must never be eradicated. They are symbols and reminders of where we were and where we don’t ever want to go again.

Everybody in this little word circle agrees that what the word represents is atrocious. We all agree it shouldn’t be forgotten.

We also agree that if you’re so inclined to think racial slurs, we’d appreciate you just coming out and saying them so everyone around you can identify you for what you are by your own admissions.

Me personally, no word offends me. The assholes behind those words and symbols, yeah they offend me plenty.

Words and History must be preserved. History and words are our lessons and our compass.

I’m going to close this out with a different word and that word is, “INSIDIOUS”.

It is conceivable as our digital age moves along that one person by changing a “0” to a “1” in a single line of code can make a word vanish as if it never existed.

Censorship is wrong.
Freedom of Speech is right.
I not only like this one by ATL, I love it.
https://www.youtube.com/watch?v=qV7T9escp20