I Love This Card!

I Love This Card!

I’ve played my “English Teacher” card a few times and I like it!

I too, officially, can be a grammar snob and a giant keeper of the word PITA, pain in the ass. I was that way prior to getting the English Teacher Designation and higher education made it official.

Shortly after I passed the assessment that gave me the, “I’m a teacher” designation a good friend who is not a native speaker of English showed me the assignment their child was given. I told my friend I really liked the kid’s thought process on one of the questions and I knew where the smartass on that answer originated.

Nice parenting indeed! That was an honest statement and not a facetious one. A little clowning with humour aint a bad thing at all. I enjoy it, in small doses.

What really got my attention was the error in one of the questions. The assignment is a “Cloze”, fill in the blanks. 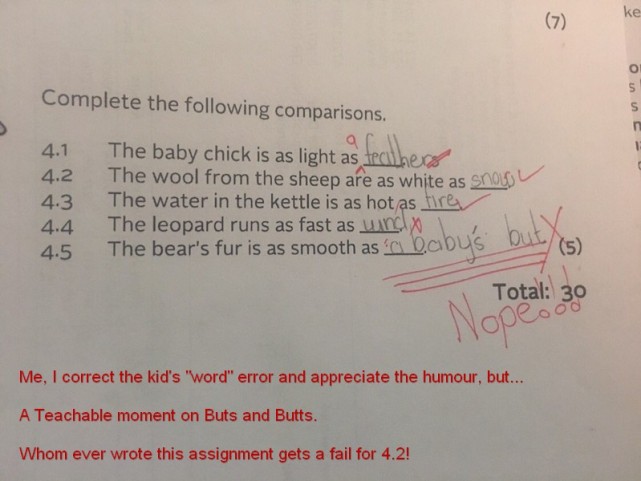 That 4.2 was shown to a couple friends who went, “What, that isn’t right” but didn’t peg the error in the moment. English is a strange thing.

Question 4.2 was shown to the parent who did return me a correct response and I trust will for ever more realize their ESL is just fine.

Playing the “English Teacher” card on that little exchange was satisfying!

I have been asked to chime in from my exalted position on several occasions as well. One of them was just identifying the word being sought and the word needed, “Voracious” was already in my vocabulary before my anointment

What isn’t satisfying is when the card plays me. I’m not sure I care for this behaviour even though it’s my own damn fault for getting the edumucation. Not a typo.

I haven’t had the same “Sarcaustic” feel to some of my opinionated pieces. I and “Good Friend” were disappointed to find that my new word was already on “Urban Dictionary” when I unleashed it. Damn! GSTA I suppose. Great Smartasses Think Alike.

All said and done, this old cunning linguist is more so and loves it!

2 responses to “I Love This Card!”