We are about a year away from the next election in Ontario. The “No Wynne” Liberals are in full save their collective of asses mode.

I’ve been dealing with chronic pain for almost ½ my life. First week of June I’ll be going to a new to me pain clinic. There is nothing of my past history following me around that is readily available to the staff of that clinic. Nothing they can review prior to seeing me for the first time. There is no historical data to compare against.

Fortunately, I keep pretty fair records and they are all electronic. The information I’ve got will still require review. We’re going from ground zero and we shouldn’t have to. Part of the reason we have to start over when there is a change, because of the Billion dollar eHealth mess up courtesy of Ontario’s Governing Liberals.

True Wynne wasn’t Premiere in 2009 and McGuinty was. Also true Wynne and her Liberals have screwed up eHealth even more. With performance as the yardstick, I have to believe patronage with Wynne’s brother-in-law attached to eHealth.

Let me make it easy for you and me, your search parameter is, “Kathleen Wynne eHealth Ontario”. You aint gonna like it.

Signing the release to obtain is no guarantee what is being asked for is going to be delivered by the record holder to the record owner, me.

Two requests were made to obtain by my current doctor of my previous doctor. The requests went unanswered.

I’ve had the who owns the records conversation briefly with 2 different doctors over the last couple days. We all agree, the records belong to the patient. Without the patient there are no records to make.

You can get a vehicle repair/maintenance report from a dealership on a used vehicle you are purchasing. If the vehicle is plugged in to the system you get what has been entered. The dealership or mechanics that have worked on the vehicle don’t own the records, the vehicle owner does.

No more should we ever be having a problem with accessing our health records. The capability is here.

Is it fair to have a doctor go back 20 years and convert the patient file to “E” format? No, it isn’t. Is it unreasonable in this age for a doctor to be providing “E” data to the rightful owner after a current visit, no. The vehicle owner gets the mechanics report so why wouldn’t an individual get a report on their machine from the mechanic doctor?

Yes I understand there are a number of hurdles but the end goal is attainable. The end goal is for an individual to be able to control their own historical health information. The end goal would be much closer had Ontario’s Liberals not blown that Billion dollars.

Does Ontario’s Premiere Wicked Witch Wynne really care about the people as she would now have you believe? Electricity rate reduction and high speed rail Toronto – Windsor corridor to name a couple recent carrots being dangled for the proletariat.

Kathleen Wynne does care about her bullying agenda and telling people what is absolutely best for them. Give Wynne pushback and she brands you or plays a card. The exception being showing up at her doorstep. Do that and then she’ll bend over and kiss your butt.

I came to these conclusions based on Wynne’s performance and oddly enough, Wynne’s lack of performance. You can bet big that Wynne and her Provincial Liberals are on board with the Federal Liberals in trying to eradicate free speech. See Federal Motion, M-103.

How soon do you think the Liberals will introduce “Governmentaphobia” in to a revised motion? All so you can’t talk about government with the scorn and disgust they so richly deserve!

I’ve used and will continue to use this Heritage Plaque that I pass 3 or 4 times a week. We as Ontarians and Canadians are entitled to a certain standard and we just aren’t getting it. Municipal to Provincial to Federal, we aren’t getting what we’re entitled to. 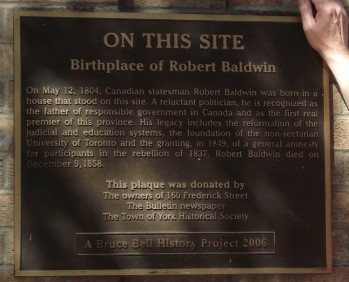 One response to “eHealth Ontario and Wicked Ways Wynne”